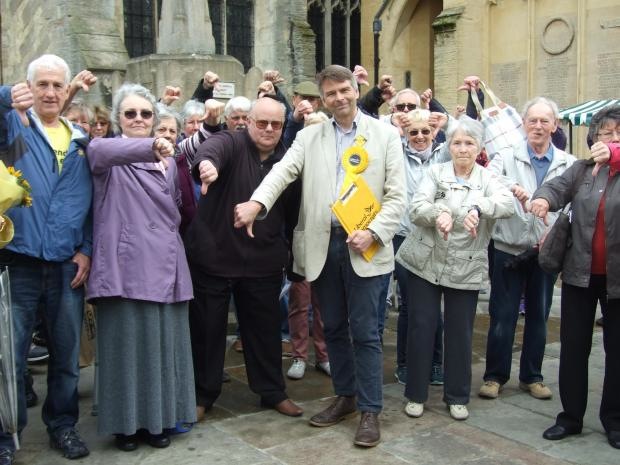 Andrew Gant - seen here campaigning against the mega Tory housing development in Cirencester - has been chosen to fight the Cotswolds seat on June 8 for the Liberal Democrats.

Andrew has been a member of the Liberal Democrats for decades. He was elected as city councillor for Summertown, in North Oxford, in 2014 and re-elected in 2016, both times with a healthy majority. He is Leader of the LibDem group, Leader of the opposition and Chair of Scrutiny on Oxford City Council.

In the Cotswolds, Andrew has been backing the fight to prevent the Conservatives on Cotswold District Council from dumping 2,300 homes on Cirencester. He believes it will change the face of our area and that a smaller number of homes is needed.

Like all LibDems Andrew works hard for his constituents both as councillor and PPC. He is a school governor in an academy trust, board member of two community associations and chair of trustees of a small but hugely successful arts-based charity, providing opportunities to young, disadvantaged and vulnerable people. At a policy level, Andrew has played a leading role in developing a distinctive LibDem approach to questions which affect real people, such as inequalities, social exclusion, and housing.

Andrew’s professional background is in music. He teaches at University level and is the author of a number of books on musical topics. He is married to Kathy, a scientist, and they have three teenage children.

Andrew was proud to be selected as the PPC for the Cotswolds in 2016, and has campaigned alongside some fantastic LibDem candidates in council by-elections, over-turning Tory majorities in places like Stow-on-the-Wold and Fairford. His priorities for the General Election include holding a long-serving hard-Brexit Tory MP to account in a region which voted Remain, exposing Tory failures over the NHS and education, and fighting for a principled opposition and a Britain that is open, tolerant and united.