Two Moreton residents are asking for a refund on mini roundabouts that were installed on the Town’s High Street last year. 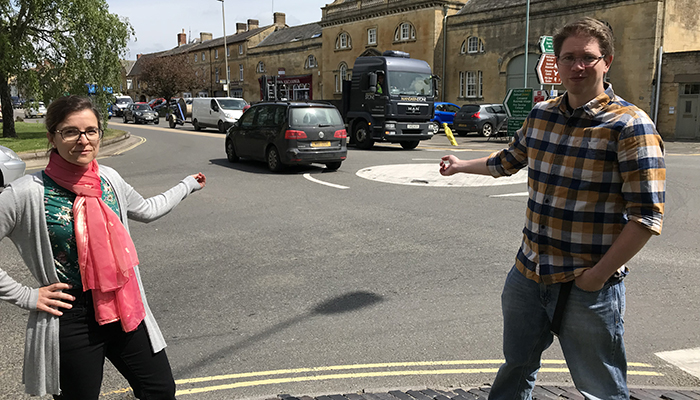 Already these roundabouts are falling to pieces and residents have hit out at “pointless” new cobblestone junctions and a “baffling” yellow strip, costing over £50,000.

The cost of the roundabouts was revealed by Liberal Democrat campaigners Rachel Coxcoon and Clive Webster following a freedom of information request to Gloucestershire County Council.

Rachel commented: “Making the mini-roundabouts higher isn't a priority when the roads are in such a poor state, I'd like to see more common sense applied to how Conservative-run Gloucestershire County Council spends tax payers' money.”

“Gloucestershire's roads are some of the worst in the country and pot holes aren't just annoying, they're dangerous. A broken wheel rim or suspension rod can throw a car into oncoming traffic, and cyclists are even more vulnerable, especially at night.”

Clive Webster, who was recently elected to Moreton Town Council said: “I’ve got a £10 toaster that's lasted longer than these roundabouts – I'd expect roadworks to last longer than a single winter, who wanted these new roundabouts anyway? Why not fix the cavernous potholes on our roads instead?”

“I find the yellow tarmac strip between the roundabouts even more baffling, it's meant to distinguish the two lanes of traffic, but looks more like a handy pedestrian crossing island. Drivers panic when they see you standing on the yellow strip, I certainly wouldn’t recommend that use.”